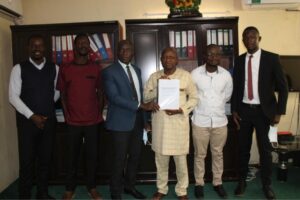 The Electricity and Water Regulatory Commission (EWRC) with support from the MCC Threshold Program has on Tuesday 16th March, 2021, handed over to the Minister of Water Resources, the completed Water Code for Sierra Leone. The team from the SLEWRC was headed by the Director General to officially present the Sierra Leone Water Code after three months of review sessions held in Freetown from December 2020 to March 2021 by related stakeholders from various MDAs and private sector players.

The water Code is a document that prescribes technical requirements for designing and construction of transmission and distribution water supply system for Sierra Leone. It documents best practice for development of water supply infrastructure to inform designers, academics, contractor, utilities and all practitioners in the water sector.

Participants from across the water sector including the representatives from Sierra Leone Institution of Engineers, SALWACO, GVWC, Sierra Leone Standards Bureau, Ministry of Local Government, Freetown City Council, Ministry of the Environment, Ministry of Health, Ministry of Works, NWMRA, Consumer Protection Agency amongst others were involved in this review process that kicked off on 8th December, 2020.

According to the Director General of the EWRC Mr. Emmanuel Mannah, the reviewed Sierra Leone Water Code was developed with support from the MCC, through the Threshold program in 2018. He also noted that for the successful finalization and implementation of the Water Code various stakeholders in the water sector were brought together to review and make inputs to the initial draft. He further added that the reviewed Water Code for Sierra Leone covers the planning, design and construction of transmission/trunk, distribution and reticulation drinking water mains and service pipes nominally from 15mm (½ inch) to upwards.

The Minister of Water Resources, Ing. Philip K. Lansana thank the Commission for putting together the final draft and promised to read through the whole document and provide comments and input accordingly. Additionally, he thank the EWRC for initiating what he termed as a very important document to enhance the development of the water sector in line with the president delivery targets.

A final validation meeting, comprising of the various stakeholders that reviewed the code, will be held on Tuesday 23rd March, 2021.