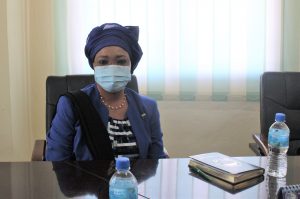 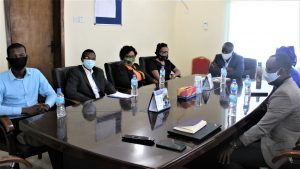 The Deputy Minister of Water Resources Namatulai Bah-Chang on Wednesday 21st October met with the Management of the Electricity and Water Regulatory Commission (EWRC) to get first-hand information about the Commission’s operations. In his welcome, the Director General of the Commission Mr. Emmanuel Mannah appreciated the Water Ministry’s support of the Commission in the execution of its mandate and in most recent times, its support in getting a number of drafted regulations passed into law.

In her response, the Deputy Minister stated that the working visit was to obtain first-hand information from the agency which would form part of the Ministry’s cabinet meeting report to be forwarded to Parliament. A presentation was done by Director of Water Ing. Michael Kargbo on the operations of the Commission and the role of the Water Department. He was commended by the Minister for an explicit presentation and further thanked the Commission for its relentless effort in regulating the various entities.

In response to her queries as to why the Commission is keen on being an independent entity devoid of governmental interference, the Director of Electricity quoted Section 19 of the SLEWRC Act which requires that the Commission not be subject to a direct control of any person or authority in the discharge of its functions as a means to ensure independence and avoid areas that border on conflict of interests and political interference.

The Minister commented on the unsatisfactory manner in which the utilities bill consumers, drawing out that there is no proper classification of tariffs between commercial entities and residences. She expressed concerns with regards to access and availability of water products drawing a disparity between the operations of GVWC and Crystal Clear water factory. According to her, the GVWC sells water to Crystal Clear at a very low-cost whereas the latter sells its products to consumers at exorbitant prices and recommended that the Economic Regulations Department look into this.

She also cautioned on the Commission’s intention to close down water utilities in coming days as a result of failings to regularize their operations and went on to encourage that the Commission work with water produces to bring them up to speed instead.